Like many social societies, Tee Set started as group of friends with a common interest in golf and with no ambition or forethought as to what the future may look like, only a desire to get together each Sunday for some friendly competition and a few beers afterwards.

As such, the annals of Tee Set past are rather bare and so the below is a piece-meal summary gleaned from the hazy recollections of the more tenured members still around to contribute and a few records which past Presidents have been able to retrieve from the days when computers had entered the Tee Set administrative universe. We certainly welcome further contributions and any corrections as these may become available.

The Jakarta Tee Set Golf Society, as it was initially known, played its inaugural game at Sawangan Besar on 4th September 1983. The players at this first game included Des Murray, Dale Potter, Jack Larson, Jean Bammel and Ed Jack, a fact we know as they were all still going strong when Tee Set celebrated its 25th Anniversary at Pangkalan Jati in 2008. Who else was there is unknown but we do have an photo from one of the early years, an early playing of the Tee Set Championship looking at the trophy taking pride of place on the chair.

Although whether he was at the inaugural game is not known, we are fairly confident that Clyde Wickiser was our longest serving active member (at least for now with Anthony King passing 31 years at 2019 Championships); Clyde was active in Tee Set from the earliest years until 2015 before ill health forced him to stop playing, although he continued as member until he passed away in 2018. In recognition of his long association to Tee Set, the Clubman of the Year award was established by President Roger Finnie in 2018 as the Clyde Wickiser Memorial Trophy. 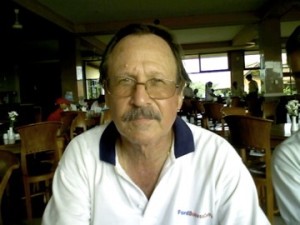 Tee Set, being largely a group of expatriates working in oil and gas in the early years, went  through some ups and downs linked to life and the economic situation here in Jakarta. Its low point (or at least one of them) was on 4th February 2007 when just 4 Tee Setters turned out for a game at Pangkalan Jati: Geoff Thwaites, Dave Nesbitt Ric Wymer and Alwyn Nesbitt being the recorded attendees that week. Since then Tee Set has grown and thrived thanks to the various efforts and initiatives of each subsequent President and their Committees.

Spurred by the low turn out, Tee Set sought to expand its player base beyond the oil and gas industry by reaching out to potential and existing players digitally, starting with the creation of a new website by Geoff & Sam Thwaites in 2007/8 and further enhanced by the blog site created in 2012 by our current Web-Guy Keith Miller, a development which also enabled us reach out to potential new players/arrivals to Jakarta through links to new arrival web-sites and latterly Facebook. Presently, Tee Set has over 20 nationalities turning out week in and week out and their business occupations are as diverse as Jakarta’s economic environment. Our weekly blogs are followed by over 600 current and past players and almost 400 (397 to be precise!) different players participated in a Tee Set event in 2019.

After the initial game(s) at Sawangan, for many years Tee Set based itself at Pangkalan Jati and from the early 2000’s a regular circuit of Pangkalan Jati, Riverside and Jagorawi for Inter-league with the occasional other course was established. “Taking Tee Set on the Road” was coined by Peter Reichlmeier as he, Geoff Thwaites, Ric Wymer and subsequent Presidents institutionalized the scheduling of games on a rotation of courses with due attention to the rainy season, holiday traffic and courses which offered its players attractive rates. These changes also certainly helped attract a broader base of players and continues as part of the annual schedule planning each new committee undertakes after the November elections. Presently, Tee Set organizes its games all around Jakarta and with many courses to choose from, we visit between 15 and 20 each year. 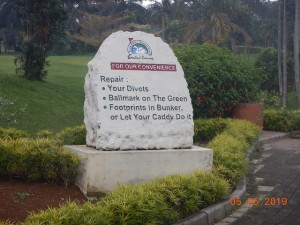 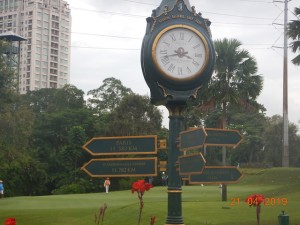 Our venerable Tee Set Championship Trophy records its first winner as Jim Rushing in 1985 and in the early years was played for twice a year. However there is no record of what happened after 1986 until the event was resurrected in 2007 and played for as an annual Championship with the winner being the best net on the day.

A knock-out match play tournament has been played on and off over the years since at least the early 2000’s, and maybe before; often the schedule was loose as we found a report showing that Matt Harter defeated Wes Whitman in the 2002 final, played on 13th April 2003! The other winners before 2007 are still be determined as we search the archives which can still be retrieved. It was certainly not held every year either complicating matters. Since 2007 however, only 1 person, Ian Barr, has won both major trophies, a feat he achieved in the same year: 2009.

Initially, Monthly Medals tended to be an occasional event when a sponsor for the day stepped up with some prizes to hand out. 2008 saw the re-launch of the Monthly Medal as a regular part of the calendar with the first event being at Imperial Karawaci (if memories are correct) and the trophy for which was, and continues to be, sponsored by Geoff Thwaites and Kojo.

To celebrate its 25th Anniversary, Tee Set arranged a big bash at Pangkalan Jati on 19th October 2008 with 18 mostly creative novelty holes (details of which you can find here: Teeset 25th rules and prizes ) and 100 players, a day which continued well into the evening with an after party at Fez if the memories of those there are correct… the golfing results on the day saw Lucas Sheard win Low Gross and the overall Champion was Lynleigh Evans.

Keith Miller initiated the idea of an annual event to commemorate Tee Set’s birthday and a return visit to Sawangan was arranged in celebration of Tee Set’s 1,500th event on 27th May 2012. 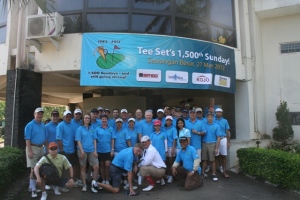 Subsequently, in 2015 we added a Low Gross Champion to the annual Championships, named in honour of George Bevege who had, at that time, recently and unexpectedly passed away shortly after departing to Manila, and an Eclectic Competition (with the format skewed heavily in favour of the higher handicaps) played concurrently with the Monthly Medal. Additionally in 2016, we added the Tee Set World Cup of Golf; all 3 additions under the guidance of our Singing President, Craig Ewers, and his Committee.

Whilst we had the award before with an almost fashionable sarong, 2008 saw the creation of the “skirt” which is still presented each week and is the award which certainly creates the most merriment week to week as those male players who fail to reach the ladies tees dress up for the photo. We were able to have its creator, Jean Zachery, model it a couple of years ago whilst she and her husband Martin were on a return visit to Jakarta. History does record its first awardees on 24th February 2008 as Graham Stewart and former President Peter Reichlmeier but sadly no picture exists from that day, not that we are short of subsequent photos to choose from.

Outside of its own weekly Jakarta events, Tee Set and Tee Setters have participated in the Jakarta Inter-League since its launch in 1991 and the Bandung Bash since 2007 as well as hosting events with and against other Societies such as Djakarta Old Golf Society (D.O.G.S.), thanks to the initiative of Juergen Degert after whom the annual match trophy is now named, and Par 5 Bali, thanks to Roger Finnie’s connection to both Societies. 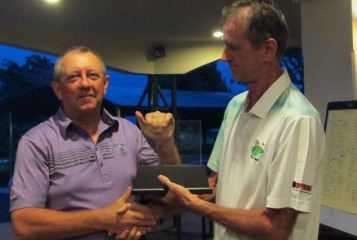 Despite fielding a couple of teams at various times in JIL, Tee Set has faced stiff competition in what is a very keenly contested set of matches each year. Although several runner’s up positions were achieved, our first victory was in 1997 by Tee Set 2 immediately followed in 1998 by Tee Set 1; victories subsequently have been few and far between with the last one being in 2015!

Our trip through the archives also found interesting mentions of events which have not been held for a while. A Tee Set Ryder Cup challenge was played, our only record of which mentions a European victory 12-10 over North America at Jagorawi in 2001 – there must be more to record if we could find details of them. Kicking off in 2000, a Valentine Sweetheart event ran for a number of years, 2000-2007 at least, with both team players (female and male partners) hitting from the red tees of course!. An inaugural Halloween Event was also held in 2000 and repeated at least in 2001 with novelty holes including “putting with the witches broom” and “driving with the witches hat”. Post round apple bobbing for chocolate prizes seemed a winner clubhouse activity!

Road trips were also more frequently organized in days gone by with Cilegon and Bandung popular destinations it seems. Something which too has died away more recently although in 2018 we did have a very successful away weekend to Surabaya and a repeat event is under planning.

All of these initiatives help to broaden Tee Set’s connection to the wider golfing community in Jakarta and today it collaborates with several societies to manage a consolidated handicap database.  We are always looking for new events to create an interesting calendar for our members and please forward to the Committee any ideas you may have… with one proviso, you are also ready to help out!

Before the initiation of the new database and results program developed by Keith Miller, scoring was done manually and so Tee Set had its own box for scorecards to be deposited into. We still have it sitting in VP Ric Wymer’s garage and may bring it out for an anniversary game shortly.

Tee Set’s logo through the years has also undergone some changes:

We are much better organized with our more recent record keeping thanks to the establishment of the aforementioned website and database above. You can see lots of interesting statistics from the last few years posted on the Annual Statistics page as well as the winners from our various competitions, where we have them, on the respective event pages.

We would also like to recognize the great sponsorship support over the years as this has been critical to making the Society such a success. Our current sponsors are shown on the website side bar here and our appreciation to all of them for their contributions.

As can be expected, the formality with which Tee Set has been managed has ebbed and flowed over the years. From 2007/8 onwards, the President and the Committee roles have been determined at the Championships each November but the period before that saw a number of years when positions were less defined in the committee structure and so the names tabulated below reflect our understanding of those committee members who at one point or another were nominally or actually seen as the President of Tee Set.  We would like to recognize all the contributions of those who have served officially and unofficially on the Committee over the years and as we can reconstruct further history we will add them too. We are also aware that there will be many contributions in the earlier years which are not covered here, a matter we would be happy to resolve if more details come to light… we hope this start on our history will prompt some memories from those were and are still around…. 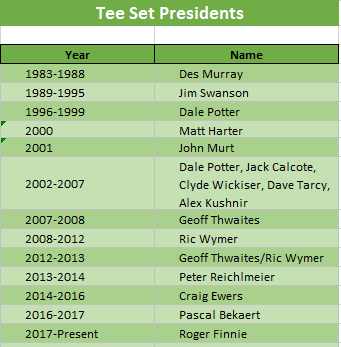 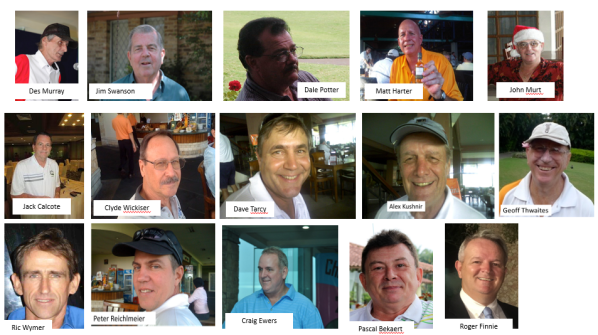